Board of Directors, Executive Members 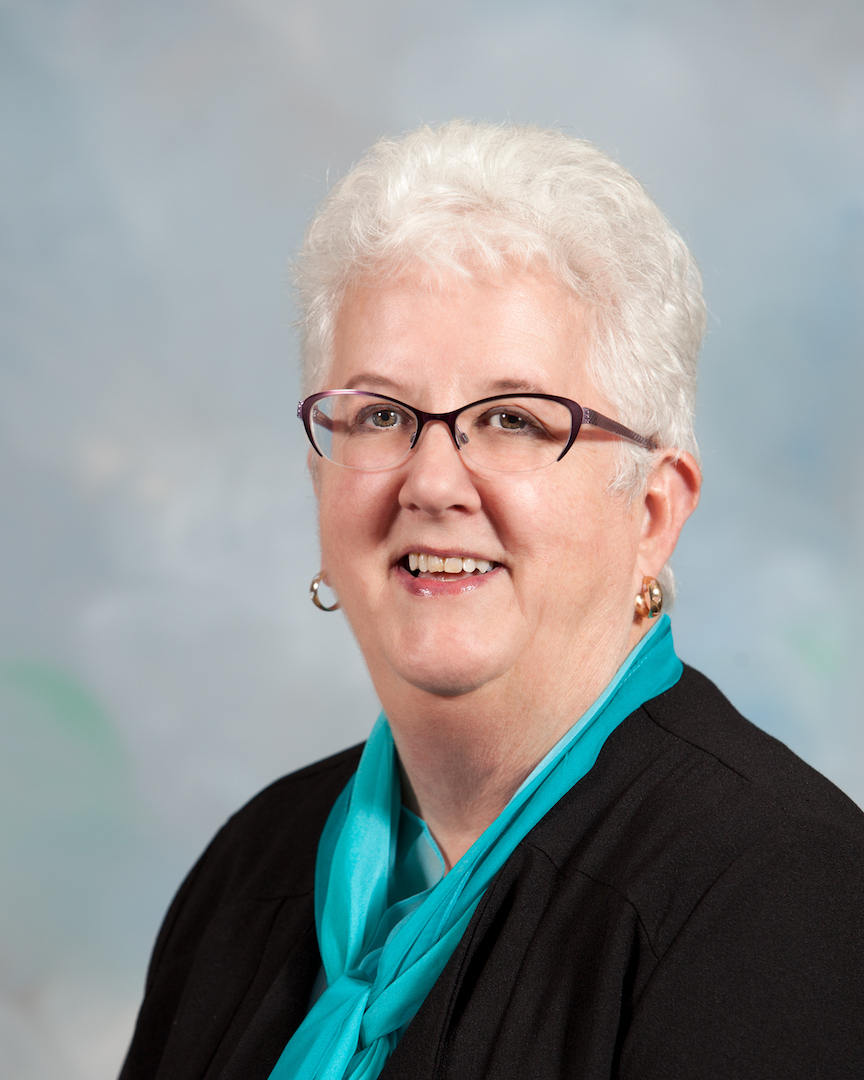 A longtime member of the Langley Memorial Hospital Auxiliary, Diane has held various executive positions and currently serves as Past President. She also volunteers at her Auxiliary’s popular Penny Pincher Thrift Store. Born in Vancouver, Diane grew up in Powell River and left after high school to attend UBC. After graduation, she worked as a Customs Broker, a career that spanned over 40 years. Diane is married to Larry Gillott. They have no children but are grandparents to six grandchildren who all live in Australia (“I skipped the middle step,” she notes). Diane and Larry enjoy travellng the world, taking cruises and venturing out in their fifth-wheel RV. They also enjoy square dancing, gardening and playing with their cute Golden Doodle puppy. Diane comes from a family of Auxiliary volunteers. Her mother was a member of the Powell River Health-Care Auxiliary and her two sisters are current members. Volunteering keeps her active and engaged, and she sees her BCAHA executive role as an opportunity to further contribute and connect with others. 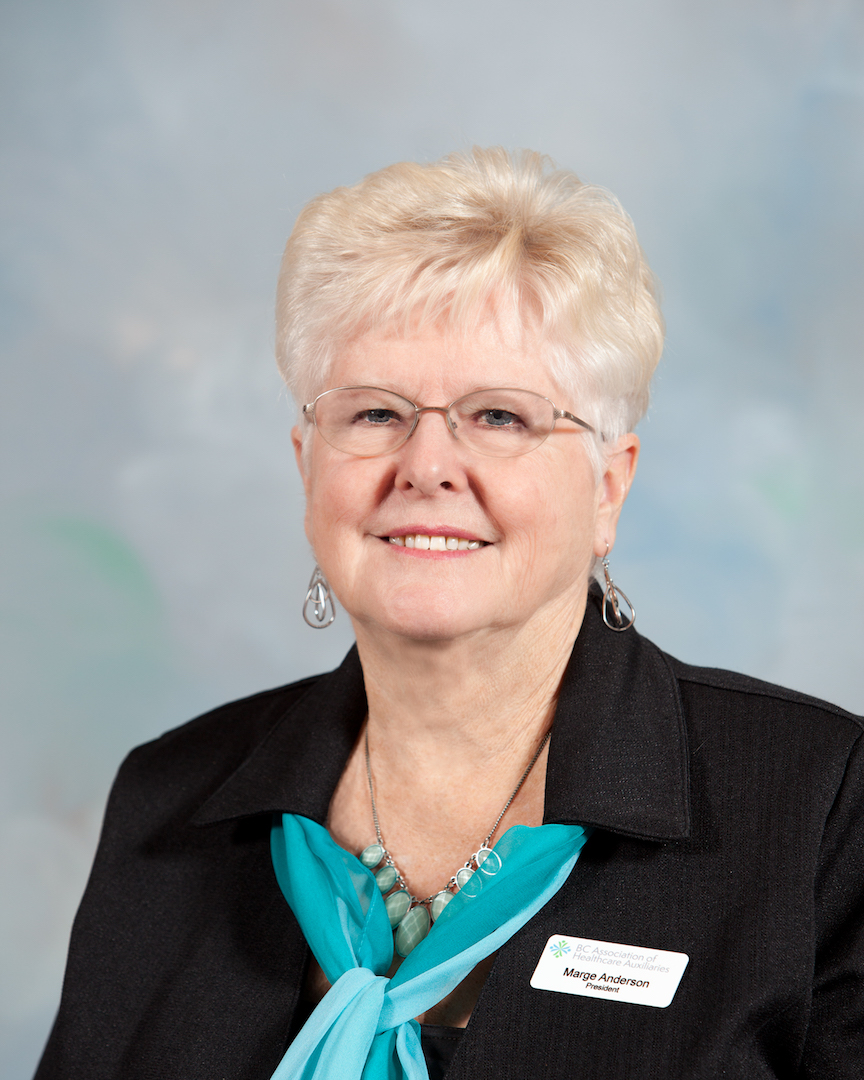 Marge has been a member of Cowichan’s Lake Healthcare Auxiliary since 2006. She was President for five years and served as Auxiliary Treasurer. She also chaired the District Council of Hospital Auxiliaries for two years. Marge’s community volunteering includes Little League Baseball, school PACs, church youth group leadership, Kaatza museum, Kaatza Health Unit Healthy Beginnings Program and BC 4-H. She joined BC 4-H as a five-year-old “pre-clubber” and later became a 4-H Junior Leader and Club Leader. She also served on the BC 4-H Foundation and the BC Provincial 4-H Council, and as a BC 4-H Conflict Resolution Manager for nine years. Marge’s working career has spanned many areas including bookkeeping, travel consultant, retail sales, hotel reception, office manager, and business partner with her husband, Paul. They have three married sons and daughters-in-law, and seven wonderful grandchildren of whom they are very proud. Marge and Paul enjoy walking, biking, swimming, boating, entertaining their many friends, and travelling. Marge’s enthusiasm and love of people bring a positive energy to her service on the BCAHA executive. 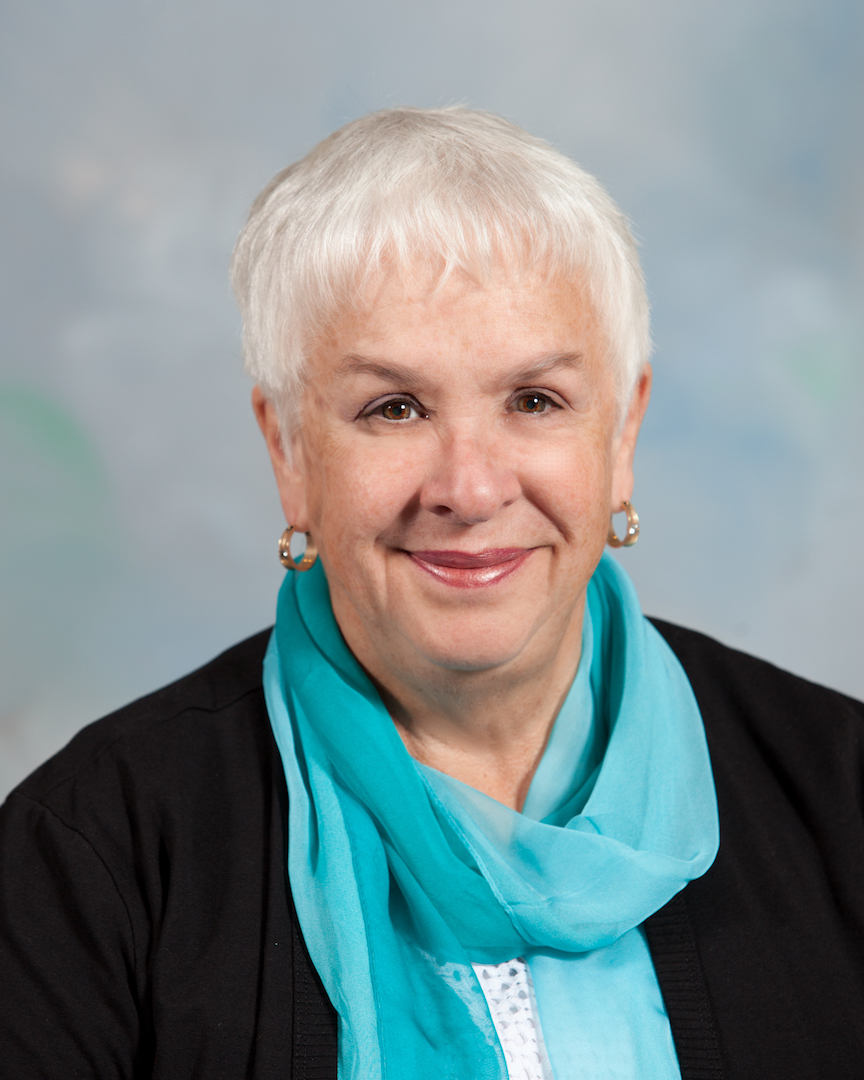 Carole was born and raised in Vancouver before moving to North Vancouver. After teaching for 28 years, she retired to her beloved, longtime family home in Halfmoon Bay, B.C. Carole joined her local Auxiliary in 2007 so that she could work with seniors at the Totem Lodge Extended Care facility. Little did she know that this initial step would lead to roles as Publicity Officer, Vice-Chair and Chair of the Halfmoon Bay Branch, and then various executive positions, including that of President, of the Sunshine Coast Healthcare Auxiliary. In addition to her Auxiliary service, she earned Life Membership in the Canadian Power & Sail Squadron and assumed local, provincial and then national chairmanship of Youth Programmes on behalf of the CPS. Carole has a son and daughter, and five lovely grandchildren that keep her busy. She enjoys traveling and has driven across many provinces, with her dog as companion, for family weddings and get-togethers. As the BCAHA Vice President she is looking forward to meeting all of the Auxiliaries across the Province. 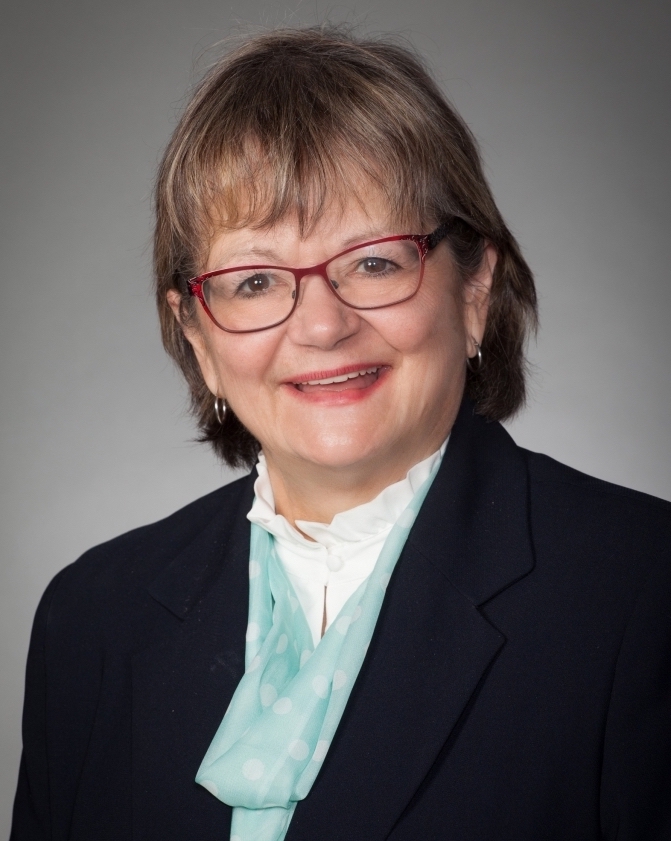 Allana joined the Trail Hospital Auxiliary 20 years ago as Secretary and to help with public relations, and she is currently in her fourth year as President. Her family and community involvement are a major part of who she is. With 48 years of married life, two daughters with spouses, and five grandchildren, life is never dull. Allana’s professional career includes employment as an LPN to help support her husband through university, working as a travel consultant, and spending 28 years as a Municipal Senior Administrator. Retirement allowed Allana to devote more time to her volunteering, which has included various positions in the Trail Skating Club and with the BC/Yukon section of Skate Canada. At present, she continues as Treasurer of the Kootenay Region and as a Level 2 Data Specialist. The Catholic Women’s League, Sisters of Colombo, and the Kootenay Boundary Regional Hospital & Health Foundation, of which she is Past President, are also cherished parts of her life as a volunteer. Allana’s energy, knowledge, and love of people and healthcare make her an asset to the BCAHA Board. 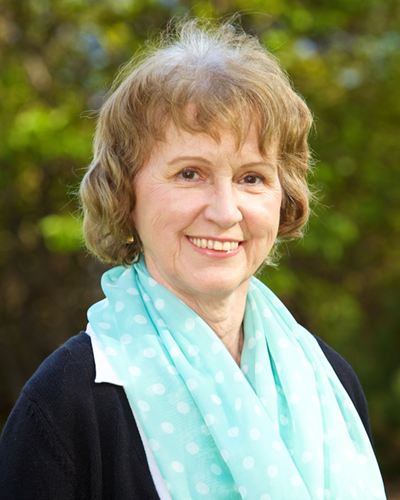 Arline has been a member of the Mission Health Care Auxiliary Society since 1995 and found the experience of serving as 2nd Vice-President, 1st Vice-President, President, and Past President of her home Auxiliary to be a rewarding and enlightening learning experience. Currently, she is a member of the Ad Hoc Committee that recently updated Mission’s Constitution and Bylaws, and is updating their Policies and Procedures. Arline was Convenor of the Auxiliary’s gift shop for five years, and is currently Co-Convenor; previously, she assisted the gift shop’s treasurer with some accounting duties. She is also an active volunteer with her church, where she provides readings and helps in the church nursery. Arline and her husband have two children, one daughter-in-law, five grandchildren, and eight great-grandchildren. When not busy with volunteer service, Arline enjoys quilting, knitting, camping with family, playing guitar, fishing, hunting, and traveling—though “not necessarily in that order,” as she is quick to point out. 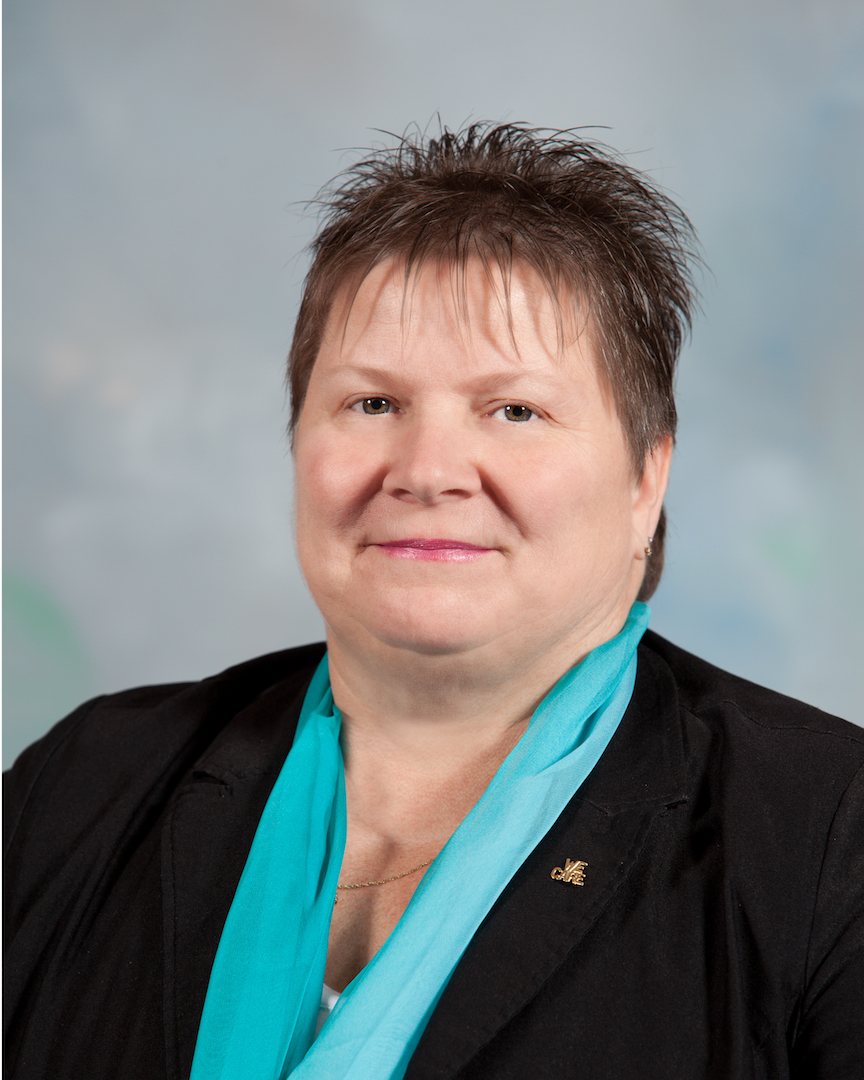 Cheryl lives in Revelstoke and has been a member of the Revelstoke Hospital Auxiliary Society since 2008. Starting as Secretary, she is now the Past President. She created the current website and Facebook page for the Revelstoke Auxiliary and she also serves on the Membership, Sunshine, and Wish List committees. For 16 years, Cheryl has volunteered with the Canadian Cancer Society, coordinating many fundraising initiatives such as the Relay For Life, the Daffodil Campaign and Slopes for Hope. Cheryl is a people person and is always eager to learn new skills. She enjoys a variety of activities including interior decorating, scrapbooking and spending time with her husband, two children and four grandchildren. As BCAHA Secretary, Cheryl brings valuable experience to the Board and she looks forward to sharing her skills to help maintain the best healthcare possible for all our communities. 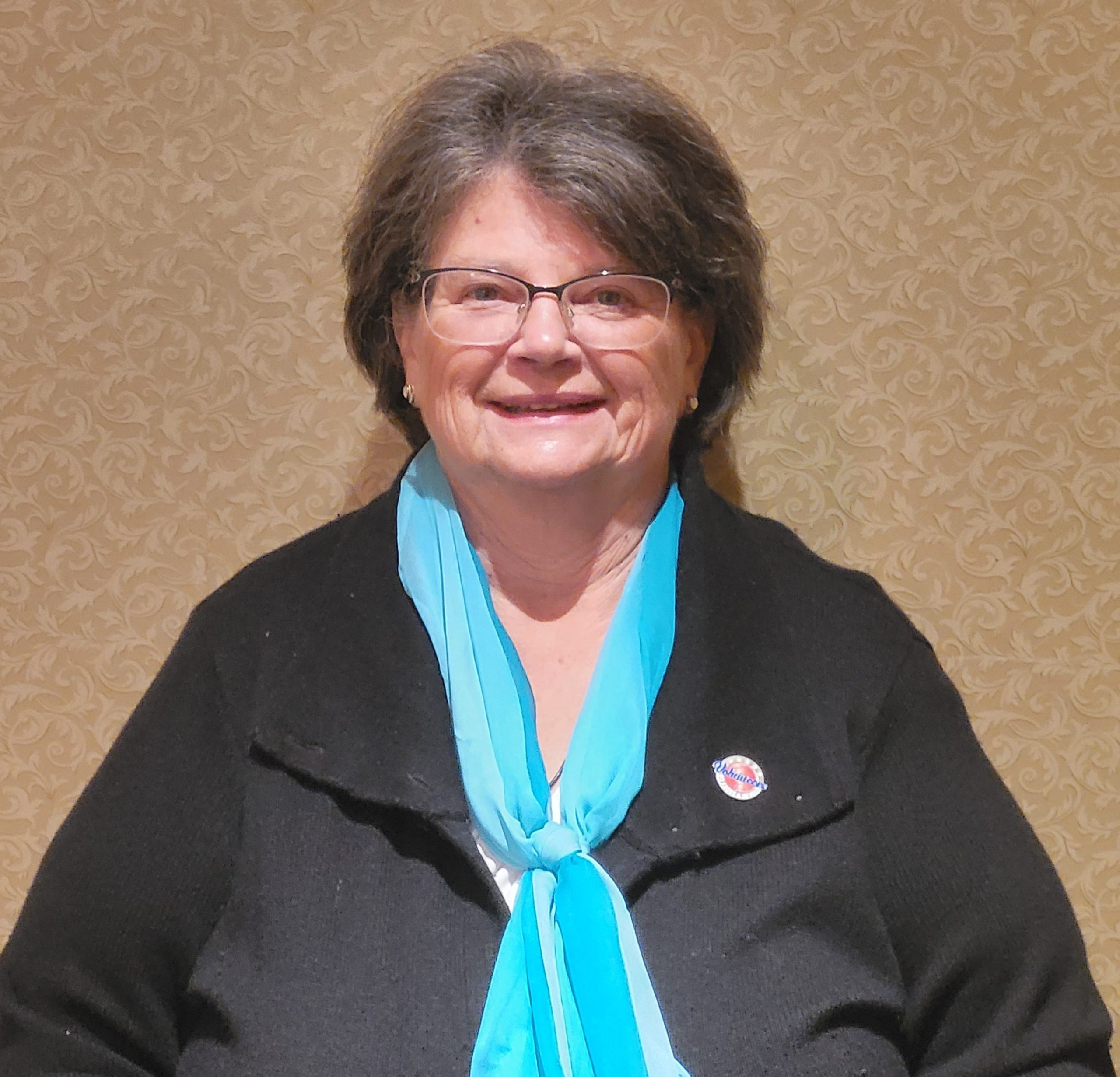 Nadi also has volunteered outside the Auxiliary in her community as 1st Vice and President of the Ladysmith Chamber of Commerce, founding member of the Nursery School in Ladysmith, secretary for the Saltair Parks Commission, volunteered with Brownies and Cubs, just to name a few as there are too many to mention.

Other than her volunteering, Nadi has been married to her husband Paul of 57 years; they have 2 children and 3 grandchildren. Nadi’s other interests are Quilting, reading, camping, and spending time with family and friends. 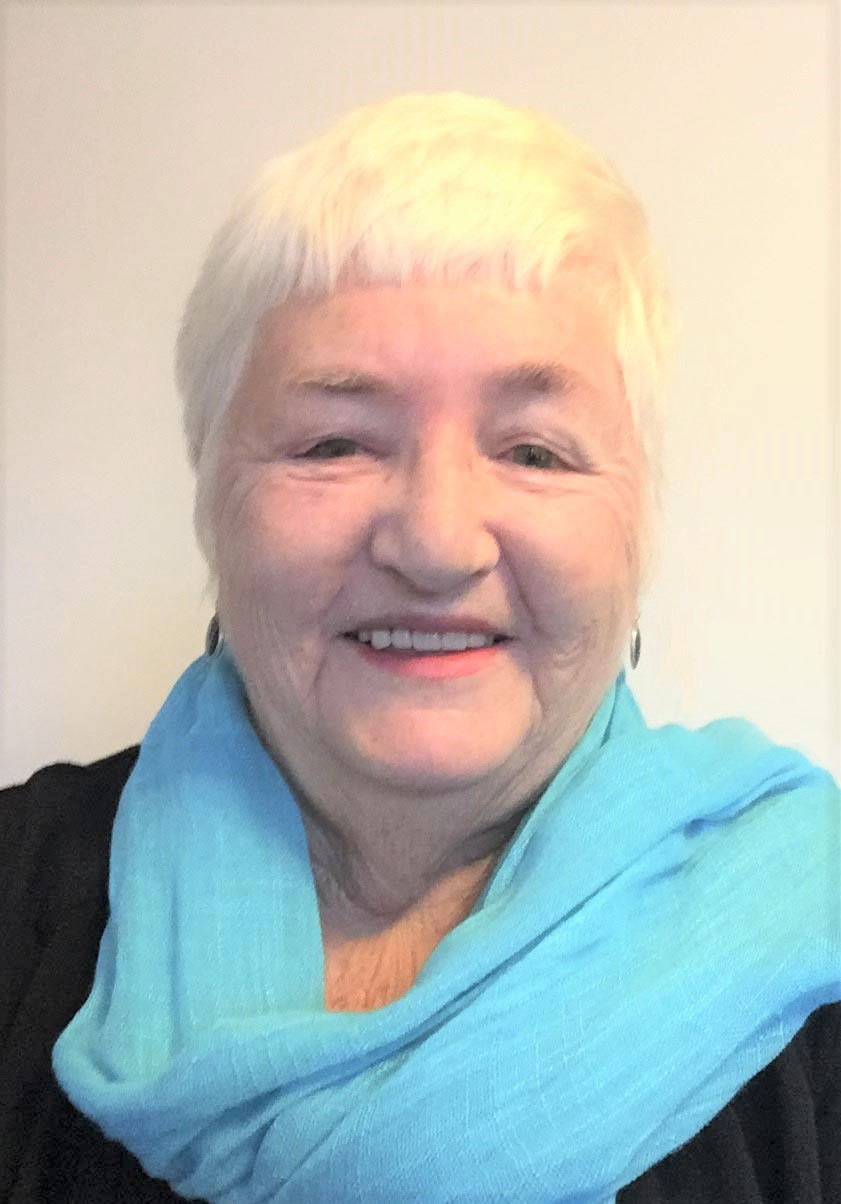 Yvonne moved from Australia after she married a Canadian, Yvonne and Sandy have three children and 6 young grandchildren who are in Ontario and California.

Yvonne taught adults ESL and was a LINC/ELSA program manager for many years in Delta school district, Yvonne had her retirement and her start as president of the Delta Hospital Auxiliary happened in the same week.  Yvonne first joined the Auxiliary in 2000 in the Ladner Thrift shop, mainly working with electrical and watch testing in the back, she has had a variety of board roles.

Yvonne is still active on various Boards in her Community, for many years she was a leader on the BC Adult Education Association board.  Yvonne loves meeting people, travelling, computers, and taking photographs.  Yvonne looks forward to working with other Auxiliaries as a wonderful opportunity for sharing and growth.

Ian was born in Powell River, attended Henderson, Brooks and Max Cameron schools, moving to Victoria in 1974, he joined the Canadian Forces in the Administration Branch and was initially posted to Pacific Region Headquarters in Victoria. Ian spent 14 years on the West Coast in various postings.

In December of 1987 he was transferred to the Air Force and moved to Winnipeg at Air Command Headquarters in Personnel Section, a position he held until he was posted to the Canadian Forces Recruiting Centre (CFRC) Winnipeg for three years as a Military Career Counsellor.

On return from the CFRC in August 1997, he moved into Air Force training, responsible for officer training for the Air Force Reserves.  On 1 January 2001 he was promoted to Major and appointed to manage all Air Reserve Training, and in June 2004 also assumed responsibility for the coordination and implementation of Professional Development for the Air Force.  In June of 2005 he was sent on a tasking for six months to Southwest Asia as part of Operation Athena, and in September 2007 he was transferred to 17 Wing as an assistant to the Wing Administration Officer, a position he held until his retirement on October 1st 2009.

Ian has been married to his wife Rene for over 50 years and they have two children and four grandchildren. They moved back to Powell River on retirement and in the fall of 2015, Ian became the President of the Powell River Healthcare Auxiliary, for a two-year term. In 2021 he agreed to step up as the President for a one-year term. 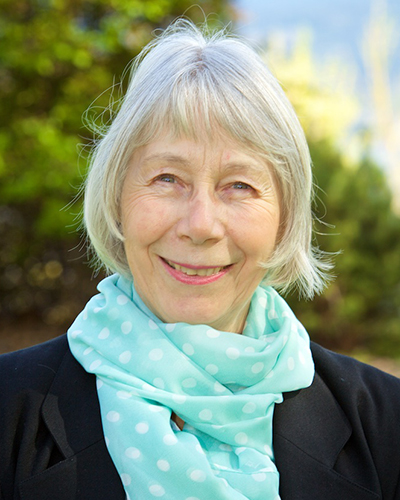 Wendy Schwab retired from her role as Manager of the Nelson Law Courts in 2012 after 35 years of service in Court Services under B.C.’s Ministry of the Attorney General. Wendy became a member of Castlegar & District Hospital Auxiliary Society since 2013, where she held the title of Secretary from 2014 to 2018 and the title of President from 2018 to 2020. She also represented the Kootenay Boundary as Area Director from 2015 to 2017. Prior to her retirement, she also volunteered as a member of Ducks Unlimited, Castlegar Branch, from 2005 to 2009. Wendy’s hobbies include pottery, hiking, cycling, and gardening. 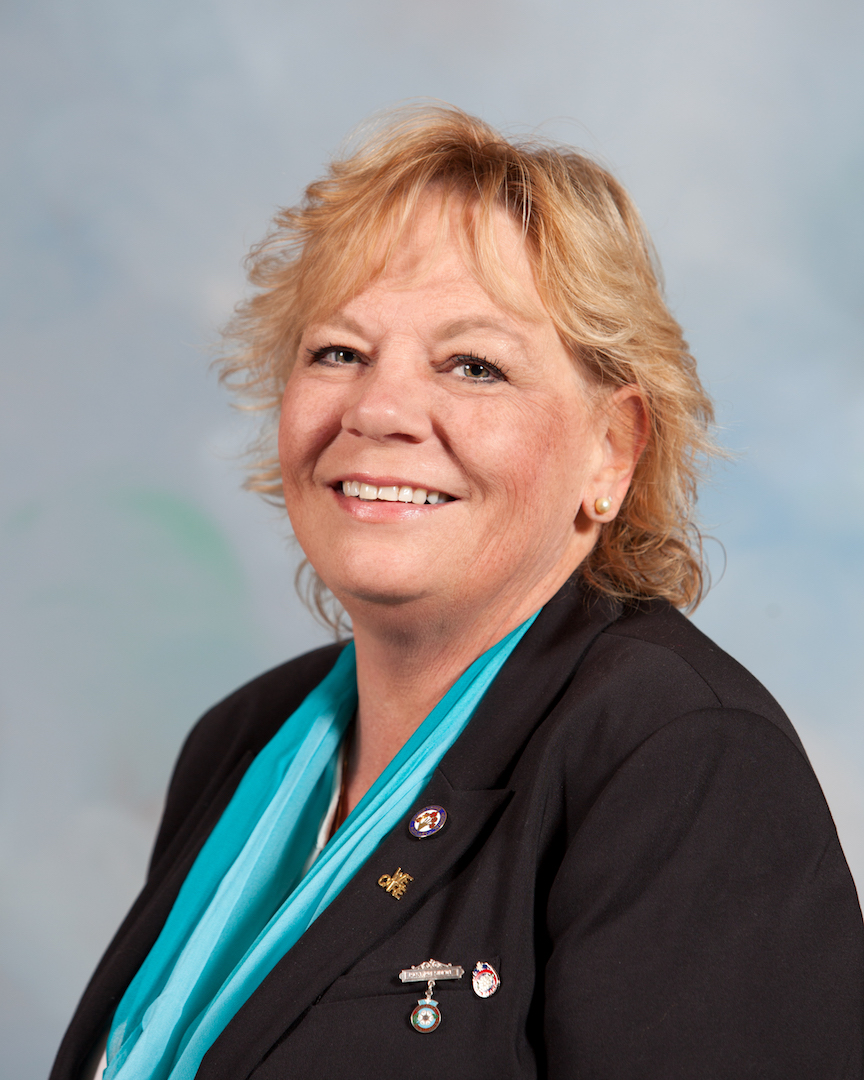 Valerie, has been a member of the Provincial Board in the position of Director of Finance. Prior to her move to Summerland in summer of 2019 Valerie has been a member of the Grand Forks Auxiliary since 2013, holding office of Vice President and President. Prior to her becoming involved with the Hospital Auxiliary Valerie served as President in the following: The little People’s Centre, Grand Forks Figure Skating Club, Grand Forks Minor Hockey Association, Grand Forks Border Bruins Jr B Hockey club, served as a director for both the West Kootenay Hockey Association and Kootenay International Junior Hockey League. Valerie has been married for 37 years, they have two girls, and two grandchildren. Valerie loves to spend her free time with her family. Valerie is looking forward to meeting all of her Auxiliaries in the Okanagan Mainline Area soon. 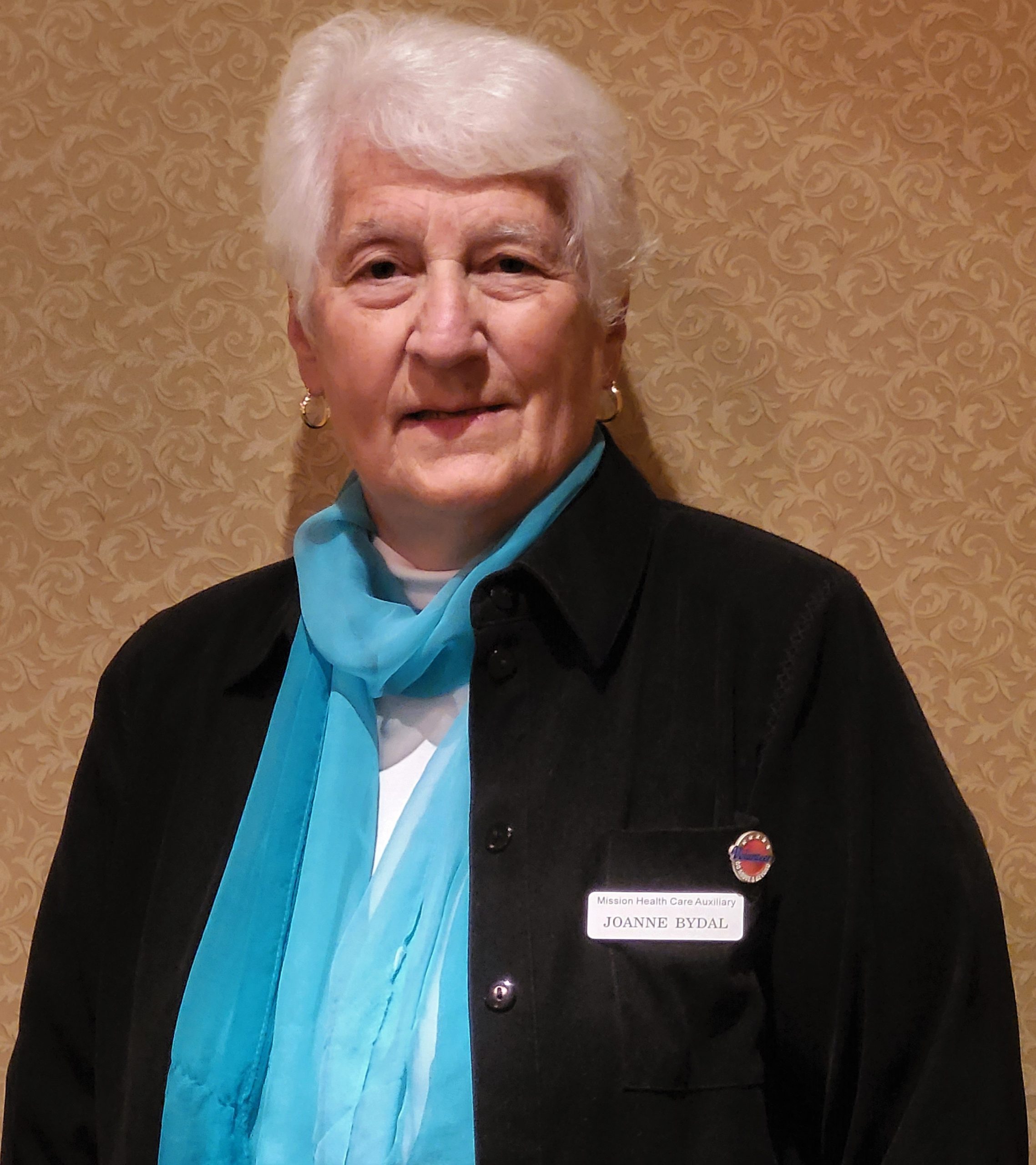 Joanne was born & raised in East Vancouver, she retired from Langara College after 32 years of service. 2011 Joanne joined the Mission Hospital Auxiliary and has been very busy ever since,

Joanne started volunteering with (TRIM), The Residence in Mission, our long-term care facility connected to Mission Memorial Hospital, accompanying and interacting with the Residents on bus trips, going for lunch or dinner, or just a scenic drive, then COVID hit and everything changed. Our first bus trip since then was August of 2022.

Joanne is looking forward to this new chapter in her life as Fraser Valley Area Director. 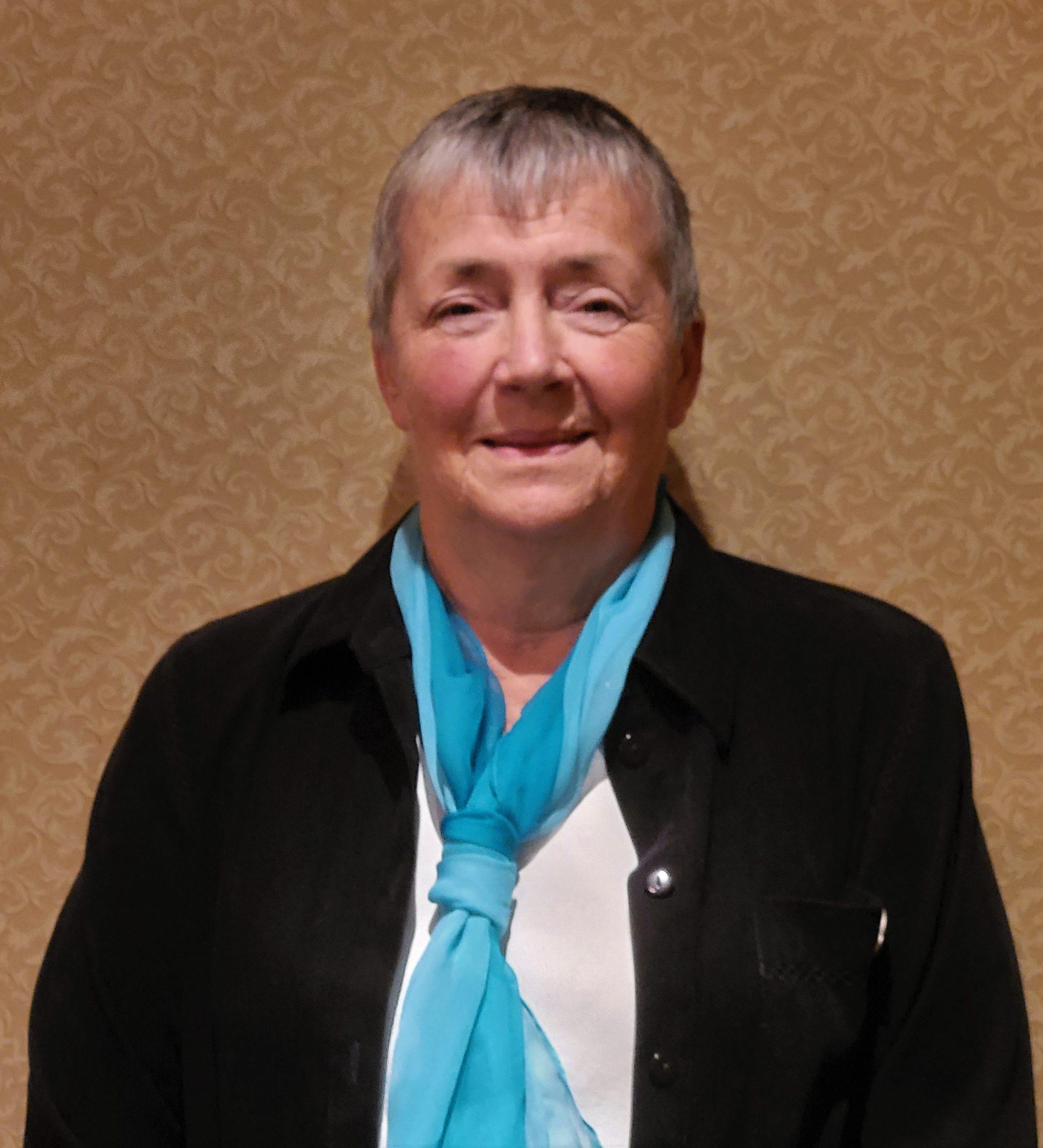 Fern was born in Southern Ontario and was raised by wonderful parents on a small mixed farm with her siblings. After completing high school Fern was thrilled to join the work force and start her “real” life.

Fern married her husband Alex of 49 years in 1969 and moved to Dawson Creek B.C. in 1971 where they raised their 3 children, Mandy, Jason, and Quinton in a lovely little “hippy” farming community.

Later they moved into town to change professions, in the course of time Fern owned a seasonal greenhouse, a concession at a little town ski hill, then opened the Baby Store in the mall.

Fern retired from the baby store when she turned 69 and focused her time into volunteering, Fern had an instrumental role in setting up the Dawson Creek Recycling Association, the Farmers Market, and currently works at the Community Gardens Society and the Hospital Auxiliary as well as Fern spent 3 consecutive terms of 3 years on the Board of the Dawson Co-op of Federated Co-op (F.C.L). Fern greatly enjoys spending time with her fabulous grandchildren, Fern is looking forward to being the N.E Area Director and serving on the BCAHA Provincial Board.